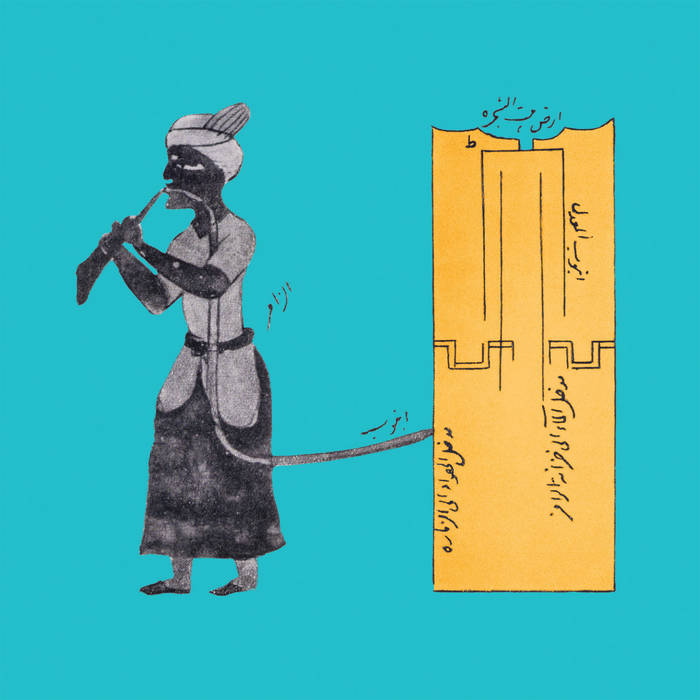 Fantastical melding of indian tabla, slow phrased mournful sax, and weird electronic noise. Often the former two are filtered through the latter. Instrumental, this is strange and hypnotic stuff, subtly noisey, world and jazz altogether. The stuff of dreams. Like John Hassell meets Third Eye Foundation with Ravi Shankar. Haas is a former member of 80's new wave band Martha and the Muffins but has since experimented with sax and noise, collaborating with the likes of John Zorn, Marc Ribot, Thurston Moore, God Is My Copilot, Keiji Haino, and Fred Frith. Thats a pretty high falutin crowd. – KZSU Radio


Amoeba Music (Amoeblog)
Eleven Excellent Electronic Albums from 2017
The second part of a three-part tribute to Muslimgauze, this album is a strange mix of reedy ambience and skittery beats. Not easy to classify but very easy to submerge oneself into, these works will transport you to a faraway world, where mystery and intrigue lurk quietly around every turn in the dusty desert road. Apparently only on CD for now, but Taballah I is LP-only, so if that's your preferred format, you can look for that one instead.

ANDY HAAS - Taballah II (Resonant Music 014; USA) This is a solo project from Andy Haas who plays alto sax, monologue and taal tarang (electronic tabla). I’ve known of Downtown saxist and experimental composer, Andy Haas, for some three decades and he continues to surprise me with each release. Mr. Haas has some two dozen discs as solo efforts, duos and trios like Radio I-Ching and the Spermic Brotherhood. This is Mr. Haas’ second solo disc under the title. ’Taballah’. Although Mr. Haas has been a member of a new wave band in the mid-eighties, he has always evolved through stages by working with jazz, improv, rock and noise bands throughout his long career. He is hard to pin down but everything I’ve heard from him is consistently engaging. Starting with “Breathturn”, Mr. Haas uses the the electronic tabla for a sly groove but put it through some devices to make it sound more mysterious. Haas plays some rather hypnotic sax, slowly dancing on top, the vibe is sort-of middle-eastern, similar to something a snake-charmer might do. On each piece, Haas alters the tail tarang, so that the groove bubbles and twists differently throughout. On “Wind Waves”, Haas adds some sort of static, bending it inside-out while his sly sax plays soft dervishes on top. The tone of the sax is central and the only consistent voice here. On “Borne on the Flood”, the tarang sounds like analogue synth and has a swell Komische vibe. Mr. Haas’ tone on sax has never sounded warmer or more refined than here, it is almost as if his tone on sax has aged to the ancient balladeer sound once made famous by sax men like Coleman Hawkins or Johnny Hodges. What makes this even better is the way he has surrounded his sublime, well-worn sax sound with layers of mutant grooves or beats. I played this disc last night before I went to bed and had a dream about hanging out somewhere safe in the middle-east and all of a sudden a spaceship lands and out come some friendly aliens… who were hanging this, “In some far place, many light years in space, I will wait for you!” Perhaps Sun Ra is coming back to save us all. - Bruce Lee Gallanter, DMG


The Answer Is In The Beat: Taballah II
I honestly don’t know much about Andy Haas other than that he was in Martha and the Muffins and he’s worked with several prominent downtown NYC folk. This one has saxophone and taal tarang (an electronic tabla) as well as lots of hissy, fuzzy electronic processing. The pulsating electronics remind me of Muslimgauze a bit, but the saxophone drifts off into a different space. There’s some intense sputtering and transforming with the electronic effects here, yet it doesn’t disrupt the saxophone journeying. Sort of space-age, sort of fourth-world, even a tiny bit industrial, but definitely not like anything else.


TERRASCOPE RUMBLES
March, 2018
"Taballah II" by Andy Haas (formerly in Martha & The Muffins) is an album of saxophone based electronic/world cuts somewhere between John Surman and Prem Joshua. Inspired by Anthony Braxton and Evan Parker, Haas is a man of processed sax sounds, somewhat in the manner of John Hassell. The music has a strange glamour that you don't notice at first, but which pulls you, trance-like, into the music. Tablas dominate the percussion and there are ring-modulated sounds floating away everywhere. The whole comes across like a fractured Indo-dream, albeit with hints of nightmare. I liked this album for its originality of sound world, for its playing, and for its overall ambience, and although one slight criticism is a lack of variety across the work, it is recommended from me for all world music aficionados.