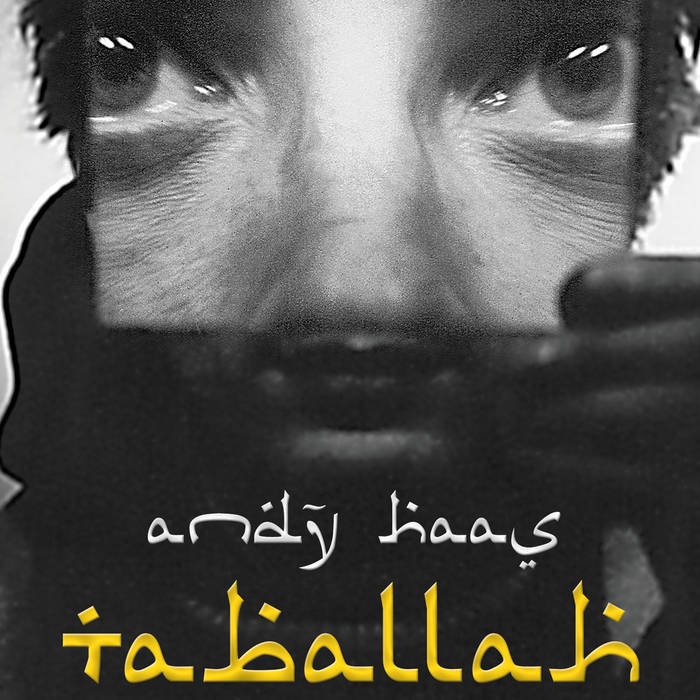 Over the course of Andy Haas' long yet quietly modest career, this NYC-based saxophonist has recorded with the likes of Keiji Haino, John Zorn, and Martha & the Muffins (he's the one ripping up the horns on their new wave classic "Echo Beach"), yet some of his most satisfying and deep work over the years have been his solo explorations. He has been playing solo gigs and making records that feature his horn being twisted and sculpted into alien tonal forms via live effects processing, fusing together elements of dub, free jazz, Middle Eastern musics, and even a bit of acid techno. This approach reaches a creative zenith with his new album, Taballah, in which Haas crafts a dark, serrated, propulsive world created with just solo horns and reed instruments, a number of live effects, and taal tarang (an Indian tabla drum machine).

Recorded as a tribute to producer Muslimgauze, these pieces squelch, throb, and burn like a fever dream; the machine drums squelch like a bad trip in a desert rave, while his reeds bend and wobble in the heat that his live processing creates. While many have attempted to mine the territory that Muslimgauze pioneered decades back, few have created work with such personal touches infused throughout. Taballah succeeds partly because Haas knows his history -- his knowledge of the instruments he utilizes is deep and impressive -- but more importantly, its success lies in his skilled playing. The man can shred, and Taballah is a rousing triumph highly recommended to fans of the recent strains of shadowed, mutated electronics and dark ambient led by labels like Blackest Ever Black, Modern Love, et al. This has been one of my favorite albums of 2014, and it's a wonderful introduction to one of NYC's most valuable yet under-regarded musicians. [IQ]

Featuring Andy Haas on sax, taal tarang (electronic tabla) and electronics. Longtime fixture on the Downtown scene, Andy Haas has worked with Radio I-Ching, Hanuman Sextet and the Holy Ghosts Spermic Brotherhood as well as releasing a handful of solo & duo offerings. 'Taballah' is his latest solo effort and again he has produced an unusual gem. The sax and electronics were played live over prepared electronic tabla tracks. The opening track is titled, "The Race of Dreams" and does has a mysterious, dream-like, drifting vibe with pulsating drones and floating sax sounds. Each piece has a different and often strange groove at the center which Mr. Haas adds sax parts on top, soprano or alto from what I recall. This music is hovers between mesmerizing and somewhat disorienting forces. It is hard to tell what exactly Haas is sampling or manipulating. Both the strange cover art of the up-close mirrored face and bizarre back-of-the-head haircut (by John Zorn) snapshots on the back of the cover add to the twisted appeal of this disc. In a universe of alternative realities, this disc sounds like a soundtrack to the weird movies that we often find ourselves inside. - Bruce Lee Gallanter, DMG

In memory of Muslimgauze and Allen Ginsberg.